In early 1953, Studebaker lifted the cloak off the new Commander and the general public looked on with bewilderment. It wasn’t that they didn’t like what they saw, it’s just that the styling didn’t make sense to them relative to a 1953 model from the big 3. The future was shocking and they weren’t used to it quite yet.

Actual car guys, however? Many fell in love almost instantly… Stan Mashburn was one of those guys. The week after driving his new Stude off the lot, he parked it at Valley Custom with the instructions to keep it mild and don’t distract from the clean factory lines.

The fellas at Valley shaved it, lowered it, rounded some corners, and reworked the wheel wells. They also added Italian inspired Buffalo wire wheels and cut a hole in the front sheet metal to allow for a grille that Stan had made himself.

Now, I have a thing for these cars… And I love Stan’s example. In fact, if I didn’t absolutely adore the stock grille on these things, I would even fall for Stan’s handiwork. It adds to what the boys at Valley Custom called an “Italia Flare” – Don’t you think?

These photos come from the June, 1954 issue of Motor Life. In that same issue is one of my favorite print ads of the period. It was rarely used, so I thought I would post it here as well: 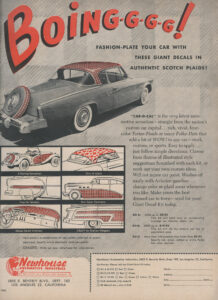